For the World Audiovisual Heritage Day 2020, the Acadèmia del Cinema Català has investigated and discovered 13 cinemas (located in 12 towns) that began their screenings 100 years ago and nowadays still active. 13 rooms to which the ACC has paid a well-deserved tribute. Four of these 13 cinemas are located in the Maresme.

Culture in Maresme is something very precious. Museums, theaters, architecture, associations and cinemas are very important in the daily life of the region, and are one attraction to add to others such as gastronomy, nature or tranquility.

The four Maresme cinemas honored are:

Sala Mozart in Calella. The arrival of the cinematograph is documented in chronicles and magazines from 1904, although it is highly probable that previously itinerant screenings of short films by Gaumont or Pathé Frères, very frequent at that time, had been made.

Argentona Parish Center. The first cinema in Argentona was El Recreo in Cal Guardià owned by the businessman J. Vila, prior to 1914. It made few profits and transferred the premises and the cinema to the Patronat Obrer de Sant Isidre, founded in 1914 by Mossèn Francesc Botey. The role of the Patronat was not only recreational, it also worked to spread Christian values and promote the union of young people. It was inaugurated on July 24, 1914. They immediately began to perform plays and films, as well as other activities for young people.

The Calàndria in El Masnou. The first screenings are documented from January 16, 1910, but its beginning as a cinema was in 1914. 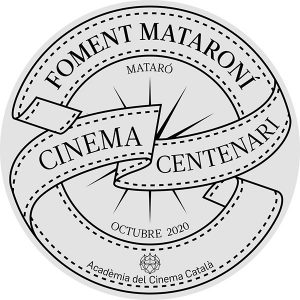 Foment Mataroní in Mataró. The origins of this local, located on Calle Nou, 11, was founded in 1832, when it was the Teatre Principal, owned by the Hospital de Sant Jaume i Santa Magdalena. The Principal, together with l’Euterpe, welcomed the arrival of the cinema to Mataró, on February 2, 1897.

From 1910, the building was the headquarters of Foment Mataroní. In the silent film period, in the 1920s, a Gaumont projector was purchased. And in the 1928-29 a new one from the Farraut brand was bought. Josep Oms, a local industrialist, designed film projectors and it was he himself who was in charge of the sound film installation at the Foment in 1932, on Saturday, December 17, with the projection of “The dawn Patrol”, by Howard Hawks.

At the end of October was in the Sala Mozart in Calella where the tribute took place, because  is considered the oldest cinema in Catalonia. During the event, the president of the Academy, Isona Passola, presented a commemorative plaque to the 13 Catalan facilities.

The Calella mayoress, Montserrat Candini, glossed the Salom family, owner of this space, stating that “culture has always been above other and this has allowed the Mozart Space to have been maintained over time and continue opening its doors to all kinds of artistic disciplines ”. The mayoress highlighted the projects that take place in Calella such as the Calella Film Festival and the Calella Film Office, “a demonstration,” she added, of our commitment to culture and to turn Calella into a set city. ”