In Maresme you live well, very well. And that is known for thousands of years. That’s the reason why many villages settled on the slopes of its mountains as the Romans.

From home, where most of us are confined, we can prepare with our children a magnificent excursion to visit, when the confinement is lifted, the Roman sites that are preserved in the Maresme.

Iberians and the Romans were good farmers. They grew cereals, especially barley and wheat, which were kept in silos. In the Roman furnaces of Fornaca, in Vilassar de Dalt, construction material and dolia (jars) were produced and used for storage. In the Cella Vinaria de Vallmora, in Teià, wines were produced that were sent in amphorae to Roman troops distributed throughout Europe, from the port of Masnou. Maresme wines were highly appreciated in Rome and throughout the empire. Also, there are traces of wine production in Can Ferrerons in Premià de Mar, between the 5th and 6th centuries AD, and of amphorae in Ca l’Arnau de Cabrera de Mar, much earlier. There were many Roman villas distributed throughout the Maresme territory: Can Sentromà in Tiana, Cal Ros de les Cabres in Masnou, Rajoleria Robert in Vilassar de Mar, the villa of the Caputxins and Torre Llauder in Mataró, or in Pineda de Mar , where there was also a long aqueduct near Can Cua. Over the years, the Roman city of Iluro, the current Mataró -capital of the Maresme-, took on importance as a strategic point, where trade was a key factor in the development of the economy, politics and culture of its inhabitants. And we cannot forget Baetulo and Barcino, current Badalona and Barcelona, ​ which were also important cities.

The Museu del Càntir de Argentona preserves and disseminates an important collection of more than 4,000 water vessels of traditional ceramic jugs, almost with more than 3,000 years, from the Bronze Age to the contemporary art.

Two Republican-era sites: a part of a residential area with a large-format domus and a clearly Italic typology, warehouses, bakeries, workshops and, above all, the public baths of Ilturo in an exceptional state of conservation, and, a pottery center for the manufacture of amphoras for wine, presided over by a rectangular oven that preserves the grill and the oven area practically intact.

Remains of a large manor house from the republican Roman era, paved with decorative mosaics in geometric style made with black and white tiles. Highlight the dimensions of the rooms, it would be the residence of a very important character of the population, Italic origin and who possibly developed political and administrative functions for the Roman Republic in the territory. Next to it was a group of houses of a much more humble format. 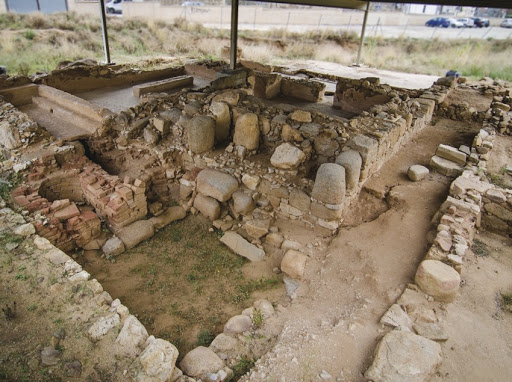 In Can Modolell, before Can Lledó, is a site where vestiges from the Iberian period to the late Middle Ages. The most relevant remains of the complex are, the structures. Could have been a pagan temple dedicated to the Persian god Mithras. Dating within the second half of the 1st century AD. of one of the altar dedicated to Kautes.

Cal Ros is a Roman villa that has functioned as a wine and ceramic producer center from the 2nd centuries BC. and V AD. It was discovered in 1899 by Thomas Morrison, who found a polychrome mosaic. The archaeological interventions have been sporadic, but they have document the residential area, as well as the rustic part, intended for workshops and storage of agricultural tasks. The amphoras made in Cal Ros were used to package the famous Layetana wine and transport it by sea to the Roman Empire.

The museum preserves an important collection of archaeological pieces from the Neolithic and especially from the Roman period, the result of excavations carried out in different parts of the municipality. In the Municipal Museum of the Nautical of Masnou you can see the bronze seal, with the inscription Publi Valeri Euryali, which gives its name to the first known citizen of El Masnou.

The remains that can be visited correspond to the artisanal and industrial facilities  of a Roman villa, in use between the 1st and 6th centuries AD, located near the city of Iluro. Highlights an oven to cook large storage vessels -dolia- and construction material. The grill, the combustion chamber, the access corridor for the loading of wood -praefurnium- and part of the cooking chamber are preserved from the oven.

The archaeological Roman site of Iluro is preserved in the historic center of Mataró. The city, founded around 80-70 BC, was about 10 hectares long and had a regular urban structure, with streets -cardines and decumani- that delimited quadrangular islands 35 meters on each side.

In the age of Emperor Augustus, near Iluro city and Via Augusta, an important wine production center was developed, which was transformed into a Roman villa that had a luxurious residence of the owners, with decorated rooms with wall paintings and paved with mosaics. The town will remind, with different uses and transformations, until the end of the Roman ages. 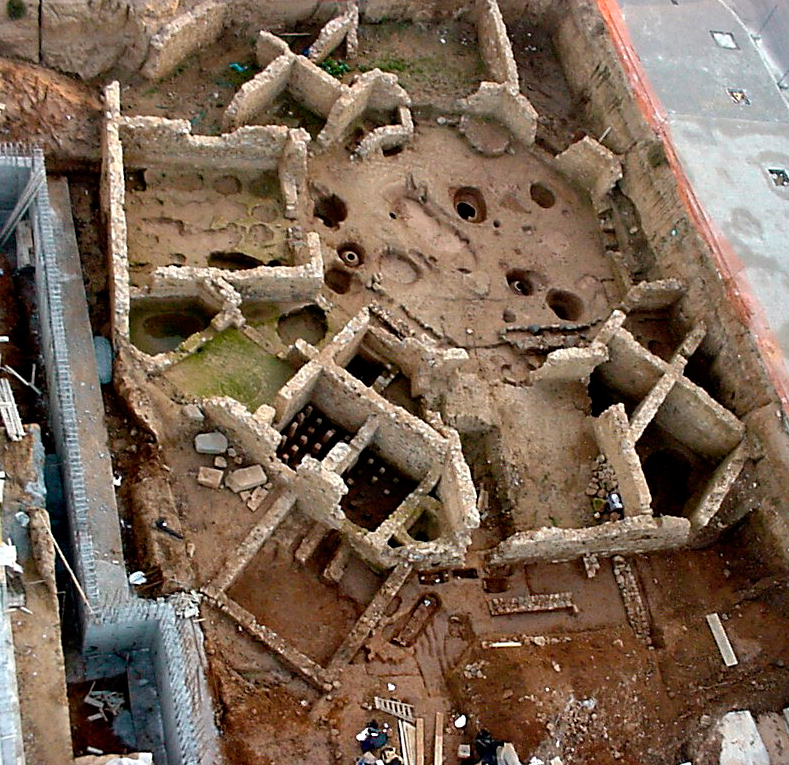 Can Ferrerons is the only octagonal Roman building known in Catalonia. It is in an excellent state of conservation, with walls 2.5 meters high. It occupies 710 m² and was built during the late-antiquity. It has three phases of occupation, which include a bathroom (balneum) and reception rooms. In a second phase, the building was used as a production site, with presses (torcularia), cellar (cella vinaria), and other elements. On the 6th century AD a small necropolis was built.

Cella Vinaria is the largest archaeological park that can be visited, dedicated to the Wine in Roman times. The tour allows you to see the largest rebuilt Roman presses in Europe and allows visitors to learn about the culture and winemaking in remote times.

The Roman furnaces of La Fornaca is one of the best preserved sites from Roman times in Catalonia. The archaeological site is made up of a pottery with three circular kilns, two with double chambers (combustion and cooking) and one with a single chamber. Intended for the production of construction material and large containers for storing liquids (dolia), they are an example of a local industry developed during the 1st and 2nd centuries AD that meets the construction need in an area with a large number of Roman villas documented.