Local festivals in Maresme, per month

Maresme is a non-stop of local festivals and fairs

Every year, when the Fiesta Mayor arrives, all the towns offer great cultural and festive activities. Along this days many people that lived in those villages but for many and different reasons live outside, come back to them to enjoy this local festivals. Dates full of experiences and memories.

This year 2020, however, most of this local festival was eliminated by the COVID pandemic. To the sadness caused by the disease, we have had to add the dire consequences for society and the economy. We are optimistic and we are convinced that next year all or most of them will be able to be celebrated and that is why we have compiled the calendar of the major festivals of all the towns of Maresme.

At the end of July and the first days of August, Alella celebrates the main festival of Sant Feliu, that gives its parish church its name, with lots of activities. At the beginning of September the Festa de la Verema takes place with wine activities, gigantes, folkloric dances, correfocs, tapas, wine master classes, guided wineries visits and presentations of DO Alella wines, as well as a gastronomic sample.

If you want further information about “Festa de la Verena”, consult our post where you can find the program and activities that take place: Live the Festa de la Verema de Alella from September 4-14.

In Arenys de Mar offers us different local festivals, highlight the Mare de Déu Fumadora, December 8th , and Sant Roc Festival, on August 16th , that young people spray the participants with scented water. The main festival is celebrated by San Zenón, on July 9th, with an extensive program that includes the departure of the six giants of the city: Tallaferro, Flor d’Alba, Roc, María, Elm and Carmeta.

The festa Major is celebrated on November 11th  by Sant Martí, the saint who gives the name to its church, built in the 16th century. The Night of Turnips and Cabbages is one of the local festivities, which coincides with January 5th. The boys hang turnips from the girls balconies that they want to meet or are interested in, with satirical or love poems, and they do the same with boys, but with cabbages.

The Sant Domènec festival takes place on August 4th at the same time the International Ceramics Fair. The most traditional events are organized, such as the renewal of the town’s vote, the blessing of the waters of the Sant Domènec fountain, the sale of the year’s jug and water games. Once the waters are blessed, it is tradition to drink from the source, which is believed to have healing properties. Other important festivities in Argentona are the winter festival of Sant Julià, on the second Sunday in January, and the festival of flower carpets, in June, in which the streets of the town are decorated. In May, the gypsy dance is celebrated, a carnival dance from the 18th century.

The International Ceramics Fair is one of the most important in the world. If you futher information about this festival, linked to Argentona you can check this page: The Argentona Ceramic Fair is here.

In Cabrera de Mar there are a few interesting festive events. The Iberoromana Fair, in June, shows the visitor the historical origins of this village. At the end of January the festival of Sant Vicenç takes place and on the first of August the Sant Feliu festival.

The Santa Helena Festival is celebrated around August 18th . Although this festival was relegated to a second term due to the great importance of the Mostra Gastronòmica that takes place the same days. Nowadays it has managed to regain its prominence. When August arrives, all the cabrilencs and cabrilenques people can enjoy this festival. Sardanas, dances, correfoc, theater or traditional dance of the giants and devils, the ringing of bells or the proclamation meet during the days of the Fiesta Mayor. All this without forgetting the genuine acts of Cabrils that have already become a tradition, such as the Gambarrada, the Cava Plates Meeting, the “gelatada” or the La Santa Peña peñas.

The month of August in Cabrils is a non-stop of celebrations with a great and varied offer. For further information about festivals and the Cabrils Gastronomic Festival click here. 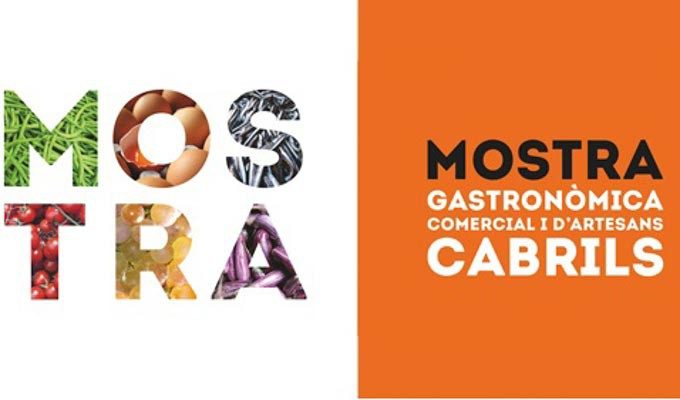 The main festival is on September 8 and lasts four or five days. Are also interest the procession of the Mare de Déu del Carme in July and the Fiesta de Santa Llúcia. The gastronomic offer is based on two products, peas and the ganxet beans. The peas are linked to the Pesolada (pea), a gastronomic fair in early spring till the end of April. The beans of the ganxet, are the protagonists of a gastronomic conference over three weeks, after Todos los Santos.

On June 16 the main festival dedicated to the patrons San Quirze and Santa Julita is celebrated. In September, the Minerva festival takes place, which includes the Calella’s Fair and the Alt Maresme, where we could find artisan products from all over Catalonia. The Renaissance Fair, which is held in June, shows the Catalan history of this era, with a market, shows and all kinds of activities. The Calella Oktoberfest, takes place the first three weeks of October. On a stage Bavarian decorated, with furniture brought especially from Munich and musical groups from all over Europe, thousands of tourists gather annually.

Dosrius celebrates the Summer Festival on the weekend closest to September 1rst, the Sant Llop’s day, co-patron of the Dosrius parish. Depends on the year it is celebrated last weekend of August and others the first of September. Traditionally the local festival starts on Thursday and Friday is one of the local holidays.

In Malgrat de Mar, the main festival of Sant Roc (mid-June), the sardana aplec in the International Folkloric Days (early September) and the winter festival of San Nicolau (December) stand out. The church of Sant Nicolau, from the 16th century, is known as the Coast Cathedral due to its large dimensions. Highlight Its neoclassical façade was dedicated to Sant Nicolau de Bari. It has a bell tower with a clock from the 17th century.

During the Sant Pere festival, at the end of June, stand up one that the participants have to build non-motorized vehicles, made with waste materials. The gastronomic fair in May and the gastronomic days in, wine and grapes are the restaurants protagonists in the area.

Las Santes, the biggest festival, which is celebrated at the end of July, has the Momerota as its protagonist. With the head of an ox and the body of a mulassa, this beast from Mataró dances and chases people who dare to approach it. There are also other cultural events, such as the Sant Ponç and Rajola Festivals.

Mataró’s main festival is called Les Santes in honor its patrons, Santa Juliana and Santa Semproniana. For futher information about Les Santes de Mataró, which has been celebrated since the mid-19th century click here.

When summer arrive, Montgat celebrates its Festival of Sant Joan. With activities for all ages whose main epicenters are the Plaza de la Vil·la, the Plaza de Sant Joan and the Parque de la Riera d’en Font.

In Orrius the Summer Festival is held the last weekend of July in honor of the co-patrons Sant Abdó and Sant Senén. At the end of November, the Festa Major d’ Hivern takes place in honor of its patron Sant Andreu.

The Sant Joan Petit festival takes place in June, and another one of Sant Bartomeu, at the end of August. One of the traditional gastronomic events in Pineda is the Jornadas del Bacalao, the second weeks of March. Also highlight the popular carbassonada (zucchini festival) and carxofada (artichoke festival) that are held annually.

The festival of Premià de Dalt is celebrated on June 29th , the Sant Pere’s day. At Easter there is an artistic festival, the Divertit-Art.

The main festival, the Pirate Festival, takes place at the beginning of July, the Premia habitants dresses up as a pirate. The giant corsair Omar, and Ester, the other giant of the municipality, are the main protagonists of the festivities. Neighbors congregate in Sant Antoni street, or in the haima on the beach.

Premia becomes a scene of fights between pirates who, led by the pirate Omar, want to conquer the village, and the inhabitants of Premià who defend it until the fifth day of the festival, defeating and driving out the pirates. You can read more about the Premià de Mar Festival here.

Sant Andreu festival, on November 30th , has been celebrated since the 10th century. In this century it was customary to kill a lamb, which was seasoned with apples. Also was tradition cook apples stuffed with meat.

September is the month of Sant Cebrià de Vallalta local festivals. The Festa Major Petita de Sant Cosme i Sant Damià with activities for young people and the “Baixada d’andròmines”. At the end of the month the Fiesta Mayor takes place.

The festival of Sant Iscle de Vallalta takes place the weekend closest to August 1, the Sant Feliu festival. Other notable festivals are the Magic Day of Maduixa i el Vi, in May, and the Festa del Bolet which is held at the end of October.

At the end of January the Fira de Sant Pau is celebrated, in which the giants of Sant Pol dance the traditional dance of the Almorratxa. It had been one of the main one in the region due to the wide offer variety of products, including the ’bavaia’ nougat, which can still be found today. On July 25, the Festa Major de Sant Jaume is celebrated, with fireworks, dances, and other activities as well as the Fira d’Art de Sant Jaume. The summer fairs is completed by the Fira Alternativa, Firamar and the Festival d’Havaneres, in August, and the traditional popular sardinada on the Pescadors beach, in September.